The Inside Epidemic? How has time outdoors changed in 40 years

With this in mind, we wanted to understand how the four (4) main categories of days - work, rest, fueling, and fun - have changed over the decades and if the technology boom of the 21st century is leading to a fall in time we spend outdoors, something that can help to boost our Vitamin D intake and production.

Analysing data from the University College London (UCL) Multinational Time Use Study (MTUS), we’ve explored how our daily activities have changed since the 1970s, with an emphasis on how our outdoor activities and leisure pursuits have been impacted by the personal technology boom of the past few decades.

How Has Time Spent Changed Since The 1970s? 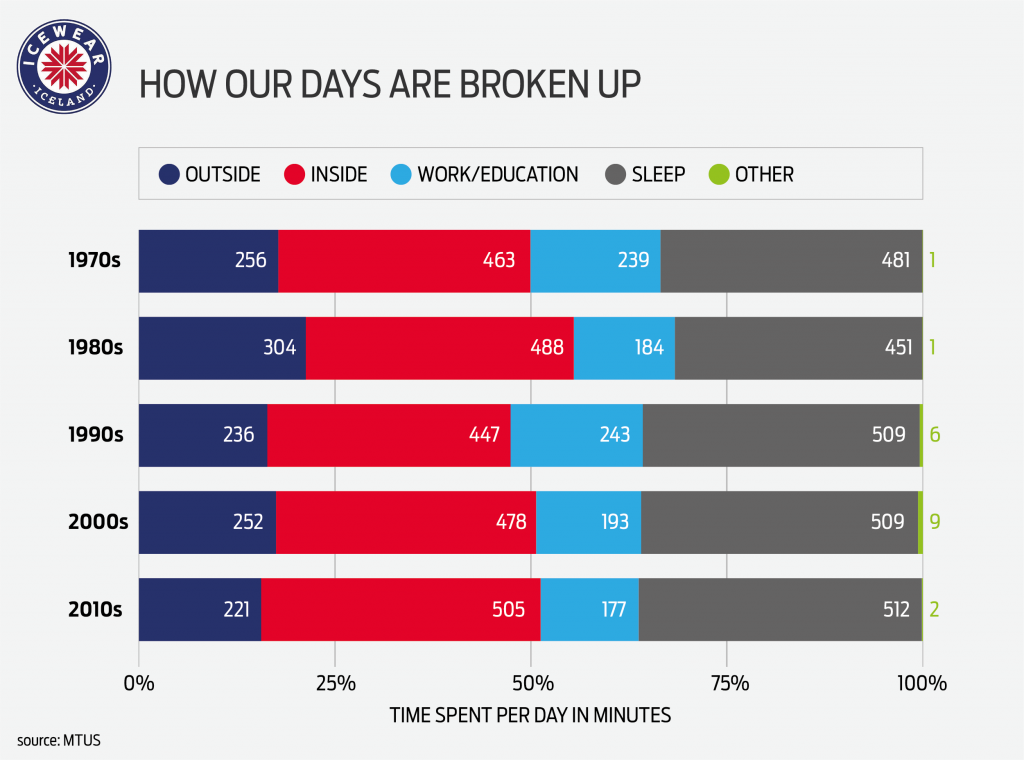 According to our analysis of the latest MTUS data, of the 1,440 minutes in a day, an average of just 3.7 hours (221) per day can be attributed to time ‘outdoors’, the equivalent to just 15% of a full day. In comparison, our time indoors is more than double that of ‘outdoors’ time, the equivalent of 35% of a 24 hour day.

Taking into account sleeping (36%) and working or in education (12%), for many working-age people (16-65), we spend upwards of 85% of our lives inside. A far cry from the amount of time our ancestors enjoyed. 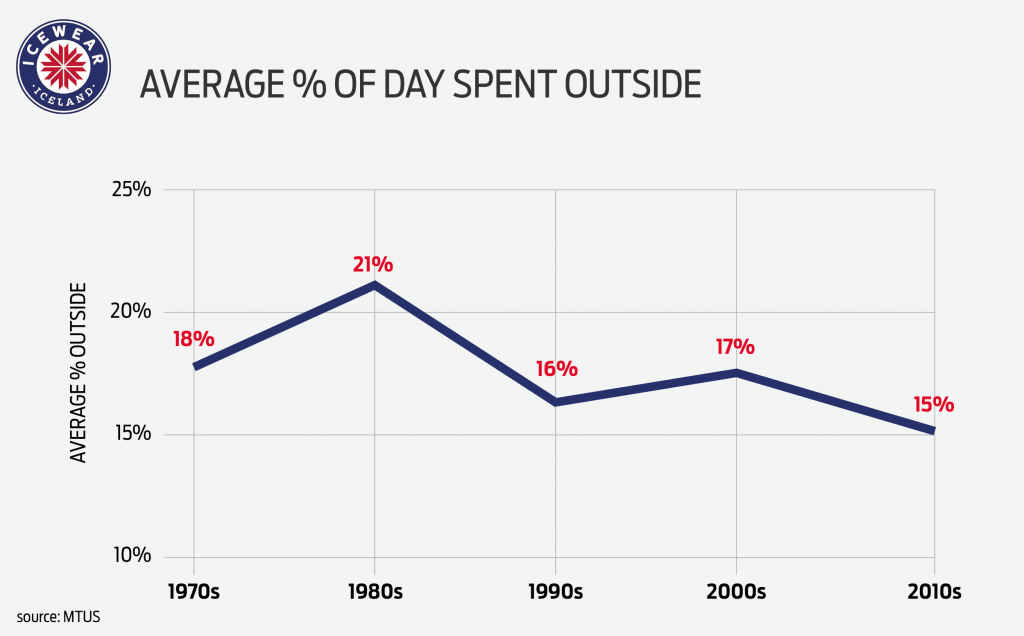 Taking into account various outdoor activities (or those that involve leaving the house and being outdoors for some time), our analysis of the MTUS data found there has been a 22% (61 minute) drop in the share of time spent outdoors by those of working age (16-65) between the years of 1974 and 2015. 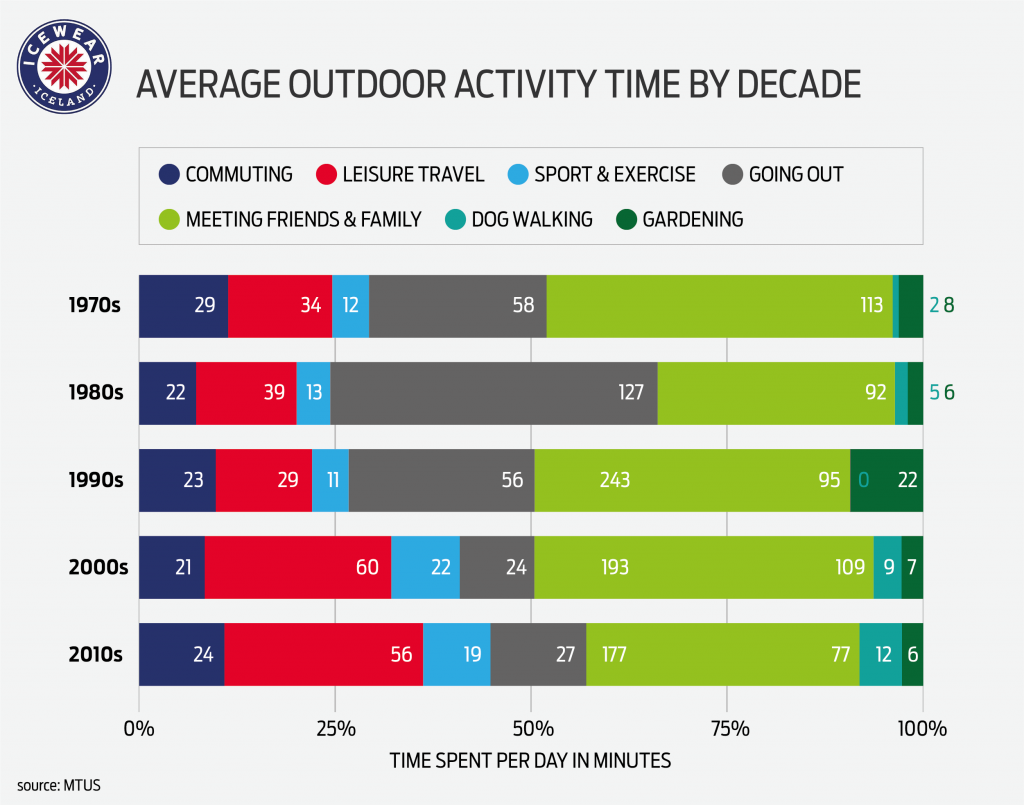 However, whilst this provides a year snapshot, it only tells some of the story. Looking at the average time ‘outside’, our analysis found that between the 1970s and 2010s there has been a 14% (35 minute) drop in the time people take part in activities listed as involving “all or some outdoor time”.

Though all the age groups analysed saw a drop in the fall in the time spent ‘outdoors’ those between the ages of 31 and 50 saw the smallest decrease (9%), followed by those between 50 and 65 (11%); 21 minutes and 28 minutes respectively.

The latest 12% drop in the percentage of time outdoors coincides with a 490% increase in Vitamin D deficiency diagnoses. 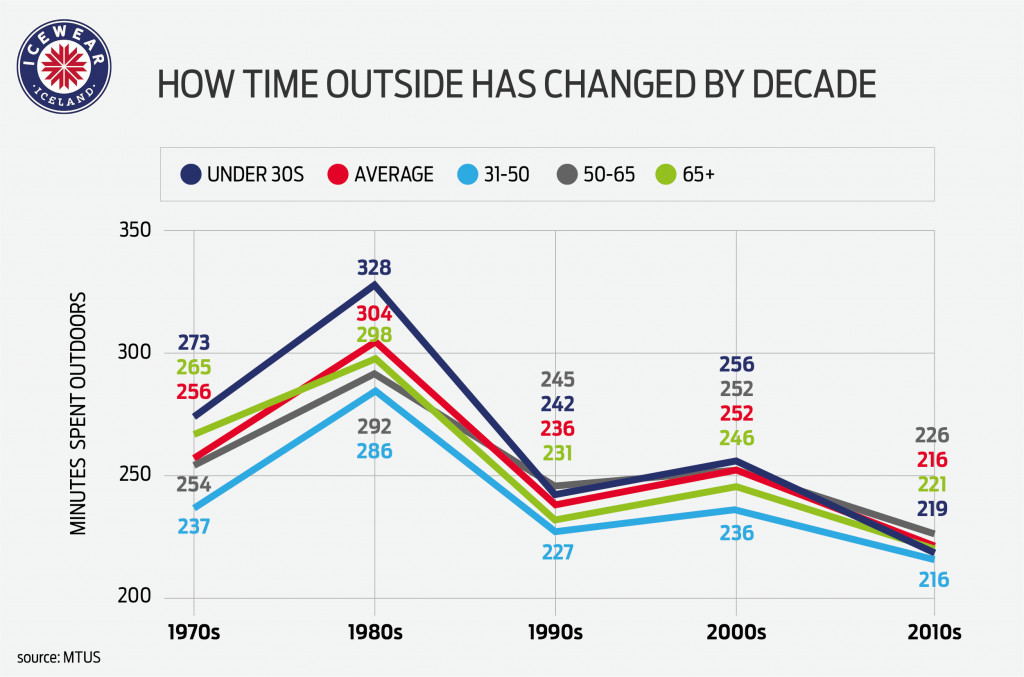 Studying the activities that involve “some or all the time outside”, we found meeting friends and family to be the most popular activity in the 2010s, with the average working-age person spending 77 minutes on average socialising with friends and family.

Prior to the 2000s, ‘going out’ to concerts and events was traditionally the second most popular ‘outdoor’ activity. However, compared to the 1970s, working-age adults in the 2010s go out 53% (31 minutes) less than their 70s counterparts. 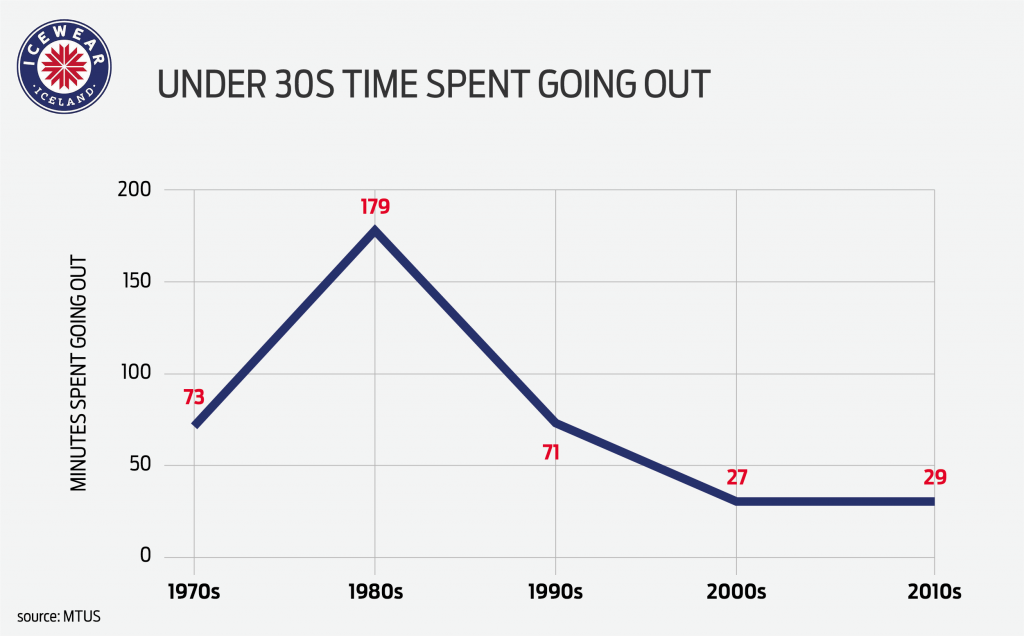 Daily sport and exercise have increased in the working-age population by 58% since the 1970s, with the average 16-65 year old now partaking in 19 minutes of sport as a daily average. Still, this is 11 minutes below the average 30 minutes of movement per day advised by doctors.

However, for the under 30’s sport and exercise is still very important, with the average adult under the age of 30 taking part in 22 minutes of exercise, a 69% increase against their counterparts in the 1970s.

Whilst many of the activities that are in total or in part outside, have seen a drop in their numbers since the 1970s, leisure travelling has seen a boom. Since the 1970s, the average person has increased their time spent travelling by 65%.

In the 2010s the average working adult spent the equivalent of 56 minutes travelling for leisure per day, compared to just 34 minutes in the 1970s.

Studies have linked our decreased sun exposure with increasing levels of vitamin D deficiency, which is a major concern for global health authorities. The importance of vitamin D cannot be overstated, with it long been linked to bone growth but also helping regulate the immune system and playing a vital role in the life cycle of our cells.

Whilst primary diagnoses provide a snapshot of severe cases and their growth since 1999, the latest reports provide further insight into the numbers of diagnoses at primary and ‘total’ split.

While 15% of time is spent doing activities that are all or in part outdoors, 85% of working-age peoples lives are spent indoors. The two most time-consuming reasons for being indoors - somewhat unsurprisingly - are sleeping (36%) and working or in education (12%).

Surprisingly, considering various reports on sleep being impacted by blue light-emitting devices, the amount of time the average working-age person sleeps has increased by 6% over the past 40 years, to a high of over 8.5 hours.

Whilst sleep has increased the minutes spent in paid work has decreased by 32%.In the 1970s the average working-age adult would spend an average of 231 minutes (just under 4 hours) in paid work each day. However, in the latest release of the MTUS, the average time in paid work in the 2010s had dropped to just 158 minutes (2.7 hours).

Some of this change can be attributed to more younger people spending longer in education rather than entering the workforce.

The figures analysed showed, since the 1970s, a 138% increase in the amount of time 16-65s spent daily in an educational activity, with those between the ages of 16 and 21 seeing a time spent in education increase of 180% (70 minutes).

In addition to paid work, many paid workers do some form of caring (whether for elderly friends and family or children) or volunteering of their time.

Time Spent In With Home Entertainment

Our analysis showed that since the 1970s there’s been a 37 minute (25%) increase in the amount of time people spend enjoying some form of home entertainment.

Studying the home entertainment categories of TV & Radio, Reading and time online, the advent of personal computers and the boom of the computer age appear to be the main reason for the 25% rise.

In the 1970s no (0) time was recorded as being online, however, by the 2010s “time online” had reached an average of 30 minutes in the working-age population. Conversely, time spent reading has fallen 19% in the past 40 years to just 14 minutes per day, whilst time watching TV or listening to the radio is up 8% to 147 minutes per day.

In response to the findings of our study, Harpa Gretarsdóttir, Brand manager here at Icewear comments:

“Our study shows that for many people their time outdoors has seen fall, with time spent each day consuming home entertainment increasing by 25%, to an average of 187 minutes (3.1 hours) per day.”

“With this in mind, along with fact, people are spending just 15% of their day in ‘outdoor’ activities, it is not too surprising to learn that Vitamin D deficiency cases have risen by 490% between the 2000s and 2010s.”

“Here in Iceland, to counter our dark winters that see our time outdoors greatly reduced, many people turn to fish oils (Lýsi) and vitamins to give them Vitamin D boosts they need to get through the months.”

“Icelanders will also look to take advantage of time outdoors when they can, either through exercising or generally getting out of the house to visit friends and for a change of scenery.”

Data was sourced from the University College London (UCL) Multinational Time Use Study (MTUS), we analysed the HAF - UK source material to gain an understanding of how people’s days were split; with an emphasis on understanding at what points they may be “inside” or “outside”.

Where data was not provided as to the locations, average estimations of being outside in part/during the course of the activity were used to produce a list of ‘outdoor’ activities. The final list of outdoor activities were: Commuting, Sport & Exercise, Leisure Travel, Dog Walking, Going Out, Meeting Friends & Family, and Gardening.

NHS data was sourced from the Hospital Admitted Patient Care Activity datasets. Cases were split between ‘primary’ and ‘all’ to reflect the change in reporting as of 2013.

You are free to use the charts on this page, however, we do ask that you link back to this page if used referencing Icewear as the source.